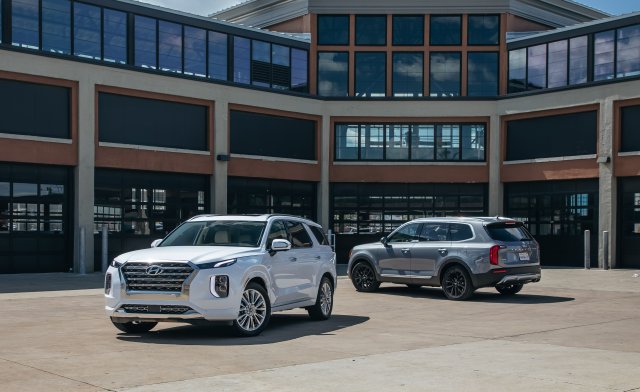 As platform-mates, the DNA profiles of both the 2020 Hyundai Palisade and the 2020 Kia Telluride are so closely related that a 23andMe genetic test would struggle to tell the two apart. Both are motivated by the same transversely mounted, 291-hp V-6 mated to an eight-speed automatic transmission. Both share suspension components, brakes, and optional all-wheel-drive systems. Each can tug up to 5000 pounds when properly equipped. But it's only natural for us to wade into the gene pool to sniff out just exactly how similar these two impressive mid-size, three-row SUVs are side-by-side. For this matchup, we selected top-spec, all-wheel-drive models in the form of a $47,655 Hyundai Palisade Limited and a $46,910 Kia Telluride SX.

On the Road
Unsurprisingly, the driving experience between these two Korean utes essentially is a wash. Perhaps the Telluride missed a morning bathroom break, weighing just three pounds more than the 4440-pound Palisade, but the extra mass is negligible. Each exhibit excellent wheel control over washboard surfaces versus some of their direct competitors, such as the Subaru Ascent and Volkswagen Atlas. Their electrically assisted steering feels precise and light—activating their Sport driving modes dials in some additional heft—and body roll is adequately maintained relative to others in the segment. Jumping back and forth between these two SUVs reveals a the slightest difference in ride quality, with the nod going to the Hyundai, but we doubt most drivers will ever tell the difference.

At the test track, the Hyundai backed up the brand's claim that the two automakers separately perform their own powertrain tuning. The Telluride's 7.0-second sprint to 60 mph is competitive for the class, but a rather violent shift from first to second gear under wide-open throttle puts it 0.2 second behind the Palisade. The Kia never closes the gap in the quarter-mile, requiring 15.3 seconds to cross the line at 93 mph versus the Hyundai's 15.1-second pass at the same speed.

Cultured in the same petri dish, both deliver similar dynamics. Both utes were fitted with 20-inch 245/50R-20 all-season tires, with the key difference being our Palisade was fitted with Bridgestone Dueler H/P Sport AS rubber while the Telluride rolled on Michelin Primacy Tour A/S tires. Nonetheless, both vehicles circled the skidpad with the same 0.81 g of lateral grip, and the Palisade bettered the Telluride's stopping performance from 70 mph by four feet, coming to a halt in 173 feet.

But how concerned are potential buyers about pushing their family haulers to the limit? More likely to impress is the capable 3.8-liter V-6's smooth power delivery and how little engine noise makes its way into the cabin of either vehicle . The Telluride cruises at 70 mph with a library-quiet 63-decibel sound-level reading, or a notable 6 decibels quieter than the Palisade. Both SUVs receive the same EPA combined fuel-economy estimate of 21 mpg. In our hands, the Palisade bettered that rating by 1 mpg in mixed driving, whereas the Telluride fell short of it by 1 mpg.

The Inside View
In a segment where bland and cheap-feeling interiors are much the norm, the Palisade and Telluride stand out with their premium trappings, particularly with our test cars' upscale trim levels. Never could we have predicted a day in which we would compare the interiors of a Hyundai and a Kia to the likes of a Mercedes-Benz. That time has come. Both vehicles feature seats wrapped in premium Nappa leather, as well as faux-suede headliners, though we're still on the fence if the Palisade's quilted door panels need to be perforated. And try to find a non-luxury competitor with optional heated and ventilated seats in the second row. Still looking?

Both the Palisade and Telluride boast abundant space for all occupants—the Telluride has an extra overall cubic foot of space that will go unnoticed—and a greenhouse that provides a panoramic view of the world. A 10.3-inch touchscreen infotainment display with Android Auto and Apple CarPlay sit proudly on either dash, and USB ports are scattered throughout their cabins to keep devices full of juice. Both the high-level Hyundai and Kia are stacked with standard active-safety equipment.

The Palisade does receive some treatments that are absent in the Telluride. The Hyundai utilizes a 12.3-inch digital instrument cluster, whereas the Kia relies on an analog setup with a 7.0-inch screen between its main gauges. The Hyundai's third row features a power folding function, but it's operation is so slow that we prefer the action of the Telluride's manual setup. Similarly, we prefer the Telluride's traditional PRNDL shift lever versus the Palisade's push-button arrangement, although the latter does make room for a large storage cubby within the center console.

The Bottom Line
Admittedly, styling is subjective, but when two contenders are this closely related, it is the only thing that counts. For us, the Telluride got the better genes. We like it so much that we immediately snagged one for a 40,000-mile long-term shakedown. The Kia's masculine shoulders and blocky styling give it striking curb appeal. Conversely, the Palisade's polarizing face and more complex surfacing simply never have us looking back at it as we walk away. That feeling carries into their interiors, with the Telluride's cabin being more visually appealing and better-executed than the Palisade's, at least to our eyes. While the Palisade's extra features aren't enough to justify its minimal price premium at this level, know that no matter which one of these Korean SUVs you select, either is one heck of a deal when fully equipped for less than $50K.
You must log in or register to reply here.
Share: Facebook Twitter Google+ Reddit Pinterest Tumblr WhatsApp Email Link